There is a solution

European democracy is entering its eighth decade since the Schuman Proposal of 1950. The Conference on the Future of Europe wound up in Strasbourg today. Will it help the average citizen?

What does the watchman see ahead: fog or clear waters? Where is the European ship of Democracy headed?

Nearly four out of five Europeans want more say in decisions of the EU, according to a recent Bertelsmann Report, Under Construction, Citizens participation in the European Union. It lists seven instruments that the politicians have designed to give an appearance of participation.

None of them are satisfactory.

The Conference has produced nothing that will make a substantial difference to today’s dismal distrust of Brussels.

How to judge? The core issue is democratic control of laws, money and strategy. Adding more ‘people’s initiatives’ and ‘consultations’ won’t cut the mustard for people’s control of untrustworthy elites. They meet and decide in secret. They can ignore everybody else and invent reasons for actions that suit themselves. Secrecy is vital for tyranny. The North Koreans know this well.

Knowledge is power for leaders; that’s why politicians often enforce ignorance for the public. That’s the way tyrants keep power.

Autocrats’ desire to keep secrets may be the essential reason why the elites have refused to publish the original documents that described how Europe should really work and describe citizens’ rights to information and control. These tools would unzip modern tyranny.

Correcting this abuse is a major challenge. Schuman’s Proposal was a work of supreme genius. Who else could create peace and prosperity after 2000 years of continuous war? There are few people of his metal today.

Can Democracy work in Europe?

Is the EU doomed to failure as a democratic experiment? Not at all.

The facade of many 'dialogues' and 'initiatives' hide and cover up the real duty of leaders to follow the treaties and for honest governance. Even the treaties that politicians invented for their own benefit contain and retain principles of real and effective democracy. They just ignore the parts they don’t like.

Instead of openness, Europe has closed-door Councils ruling the roost, dishing out taxpayers' money according to their own rules. There are no published records of their debates, nor public access. Hence no accountability and no public trust.

What is the solution?

First, blow away the fog. Europeans have legal rights far beyond these inadequate, fig-leaf instruments that have little or no legal effect.

Leaders of three EU institutions pledged on 19 April 2021 to have an in-depth analysis of how the present 'democracy' differs from the original democratic framework and human rights safeguards drawn up at the start of the European Community in the 1950s. What really happened that the public is now so disdained?

Re-publication is an obvious first step to reverse the Democratic Deficit that the public have complained about for decades. Parliament is open; Council is closed.

Distrust is the inevitable result of politicians' disdain. The public in their Referendums rejected government by secretive councils. Each treaty with more secret bureaucracy was resisted time and time again.

Democratic fiascos followed the politicians plans for the Maastricht, Nice, the Constitutional, Reform and Lisbon treaties. Member States had referendums that rejected all these treaties. Public opinion was ignored or the public was told to reverse their vote.

What happened on the first and therefore the most important treaty? No referendum, no public debate even, was offered on renewing the foundational European Coal and Steel Treaty in 2002. It was stopped. Result? Disaster in the steel and energy economies.

And a decade later? Brexit was the inevitable result. The British referendum was actually based on a treaty the British public had never agreed to, and the French had rejected! (compare the Constitutional's Article 59 with Lisbon’s Article 50: they are practically word-for-word the same).

Conclusion: For decades the political leadership has failed the people.

Where are the goods?

The leaders failed to look at the original Schuman design for European democracy. In spite of my several complaints to the Ombudsman they failed even, as a bare minimum, to agree to publish the original constitutional documents. The Charter of the Community outlines how Human Rights should dictate fair and honest institutional development. (See https://schuman.info )

Schuman and the Founding Fathers envisaged, for example:

The same medicine is required in Brussels as in North Korea. The first step is for the public to insist that the Council of Ministers obey their own treaty. Their debates should be published. The press should be allowed to follow all aspects of the debate. The public should see it all on television and the internet. Only when ministers become accountable will a semblance of democracy begin to glimmer through the opaque panes of the Justus Lipsius building.

Posted by David Heilbron Price at 5:31 AM No comments:

Democratic Deficit Deepens at the Conference on the Future of Europe

How the EU institutions refused to Discuss Democracy. 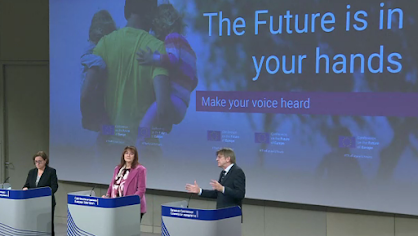 I wrote the following contribution for the section DEMOCRACY on website of the Conference on the Future of Europe.

Wow!For the first time our European leaders (Commission, Council, Parliament) promised to publish here the documents showing how Europeans got their democracy. They show how and why Europeans did not fight another war amongst themselves after WW2. Documents on how Europeans should develop their democracy in FIVE INSTITUTIONS with as Guardian Human Rights Court of the Council of Europe were signed 70 years ago, 18 April 1951.These are the most important documents of modern times.Astoundingly the five European institutions have NEVER published these vital documents. Politicians refused. Following the request of EurDemocracy.com, now they will be!1. Full text of Schuman Declaration (including the Schuman Proposal) made on 9 May 1950. It shows how Europeans have avoided WAR for the longest time in more than 2000 years.2. The Great Charter of the Community signed on 18 April 1951. This is also called the Declaration of Interdependence. It shows how citizens must have FREE CHOICE in treaties and election of the five institutions. Instead treaties such as the present Lisbon Treaty (and its previous version the Constitutional Treaty) were implemented AGAINST the Will of the People as expressed in public opinion polls and referendums. Europe must not develop like the fraudulent 'People's Democracies' of the Soviet bloc. Elitist Politburo imposed decisions from behind closed doors. Treaties say Councils should be OPEN to the public. Treaties ban party membership for Commission.

I posted the following update of my letter to leaders of the institutions.

Dear Conference presidents,I am a journalist accredited in Brussels and Editor of the Schuman Project.On 19 April 2021 (the day after the 70th anniversary of the signing of the Treaty of Paris, founding the European Community) Vice President of the Commission Mme Dubravka Suica, Mme Zacarias of the Portuguese EU presidency and Mr Guy Verhofstadt of the EP held a press conference at the Commission launching the Conference on the Future of Europe.I asked that the original documents on Democracy agreed and signed by the Founding Fathers be published to facilitate the debate and conference decisions on European democracy.All three institutions agreed that they would be published for the Conference and analysed.They still have NOT BEEN PUBLISHED!

Nearly 1000 people said they were following this online

I have followed the EU Conference on the Future of Europe and have never found anything as interesting as your publication.

I published the following:

WHY have the foundational documents on Democracy, STILL NOT been PUBLISHED, as promised by Commission Vice President Suica, Council President Zacarias, EP Guy Verhofstadt on 19April 2021??

I was refused an answer as I had asked this earlier in the Commission Press Room. (But had not received an explanation!)

I also asked: why has the analysis of democracy not been published, comparing the original Community system to the present 'EU' system as also agreed by institutional leaders a year ago?

A high Commission official said: We are interested in the future not the past.

The institutions confirm that for them Democracy is a thing of the past!!

Posted by David Heilbron Price at 8:49 AM No comments: