Is EU dancing to the tune of Big Pharma? Bye bye, € Trillions!

The EU Commission Press conference today was about 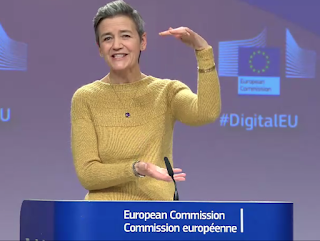 Two Trillion euro Question for all Europeans
I asked the Commission anti-cartel chief about what the EU was going to do about Big Pharma withholding raw data on which EU vax policy is based. There is huge money involved.
The cost of Covid 19 to the EU?
More than 2 Trillion euros has been and will be spent on the 'pandemic' and recovery programmes.
The normal annual budget is about 180 billion euros. The sum involved is more than ten times the annual budget.
Where is the rational evidence and approval for spending so much taxpayers' money?
I quoted BMJ editorial (British Medical Journal): Pharmaceutical companies are reaping vast profits without adequate independent scrutiny of their scientific claims.
Thus trillions are being spent without democratic control and scientific justification.  Who are responsible for waste and fraud? The Pharma industry have a lamentable reputation as recipients of largesse.
It is 'morally indefensible' not to provide doctors and the public with full data on vax trials that injure lives and cause deaths, beyond the symptoms of Covid-19.
The BMJ wrote:The purpose of regulators is not to dance to tune of rich global corporations and enrich them further; it is to protect the health of the populations.
Pharma firms reckon they own the raw data necessary to justify their vax policy and massive sales to the EU. They do not divulge the data about vaxed and unvaxed and the claimed effects of their experimental injections. Normally an experimental procedure would be tested over many years before being released to the public. The present operations are therefore 'experimental' based on data that the public has not seen.
Pharma firms have their employees and contractors publish papers showing positive results that stimulate sales. What data are they based on? In the Tarniflu case a decade ago governments paid for expensive stockpiles, only to find out that the approval of the drug and the trials were the result of papers, most of them unpublished, and those that were were written by ghostwriters paid for by the manufacturers. The researchers listed as principal authors lacked access to the raw data. Those who asked for access were fobbed off.
FRAUD Big Time!
The only access public and regulators have is via these published papers based on the restricted data. They never see the raw data. Then their response to Freedom of Information action is drip feed the info over many years.
For the public 'we are left with publications but no access to the underlying data on reasonable request.'
The BMJ Editorial is at https://www.bmj.com/content/376/bmj.o102
Are the EU politicians and regulators fully aware of the nature of the evidence before they commit trillions to Big Pharma? Can Pharma be trusted? The BMJ editorial points out that Pharma is the least trusted industry among the 25 main industries. They have paid billions in fines and for fraud.
A Gallup poll showed that 58% of the public had a very negative or somewhat negative view of Pharma compared with a mere 27% giving positive views. 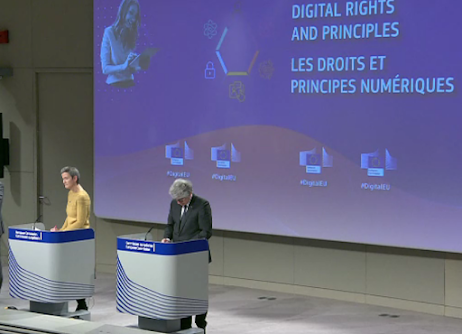 My Question is at 12min 30s on https://audiovisual.ec.europa.eu/en/video/I-217300
'We are not here to enrich companies,' Vestager said. 'We are here to make sure data serve their purpose if their owners, the individual wants them to and that data can be made available for research and innovation.... We are in the process {to create} a health data space in order to let everyone know what data is available on what terms. Secondly trials have to be proved to be real trials.'
Too little, too late?
Only after strenuous efforts were the first data on the injuries caused by the new breed vaxes released, a year late. Requested info under the US Freedom of Information Act (FOIA) showed more than 1200 deaths in the first 90 days up to 28 February 2021 and some 160,000 adverse effects and debilitating disorders.
Why wasn't this data released a year ago?
As the BMJ wrote:
'We need complete data transparency for all studies, we need it in the public interest, and we need it now.'
Posted by David Heilbron Price at 9:37 AM No comments: 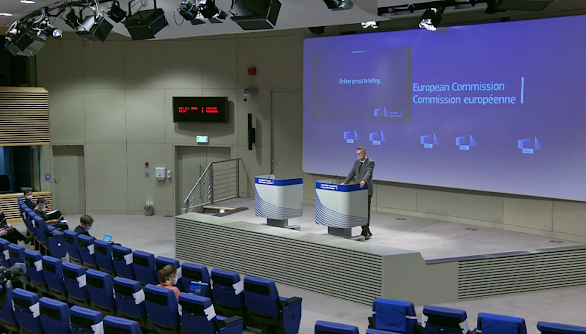 Europe is in grave DANGER.

Technocracy has OFFICIALLY replaced any veneer of Democracy and Transparency. What can the citizen do about it?

Here are the new rules of the European Commission. They override any law or treaty, apparently.

Censorship on bureaucratic and technocratic maladministration is the rule! That is what the Spokesperson of the European Commission declared in answer to my question.

What was my question? I asked when was the Commission going to publish the founding documents of modern Europe, Charter of the European Community. This defines how citizens can appeal against all sorts of bureaucratic abuse and malfeasance. It was signed at the time of Europe's first Community treaty in Paris on 18 April 1951.

Here is a link to my question: https://audiovisual.ec.europa.eu/en/video/I-217128

Commission Vice President Suica confirmed on 19 April 2021 that this and other historic documents on transparency and democratic control would be published for the Conference on  the Future of Europe.  That conference was initiated by French President Macron in response to the Democratic Deficit and Brexit. The conference is now drawing to a close without any discussion on the Charter.

Now apparently the bureaucrats themselves have decided that they should override both the Vice President and the public. They are refusing to publish the Charter.

The founder of the European Community, Robert Schuman, probably had Britain's Great Charter, the Magna Carta, in mind when he called it the Charter of the Community. It is a system of justice and fair government. It defines the linkage to the human rights process.

The European Commission said that it is not going to answer the question, even if I asked it again. In fact the Spokesman refused to allow me the usual follow-up question, twice.

This is quite an extraordinary position to take. For half an hour, Mr Mamer had just answered multiple similar questions by different journalists on the bureaucratic consequences of Covid 19 on free movement of citizens. We have answered this question a thousand times, he said.

And if any citizen had the naive idea that an appeal to the European Ombudsman about maladministration would have any effect on the Commission, they are mistaken. The Commission said they would ignore it!

Europe is in real danger.

After my question in the Commission Press Room, Eric Mamer, the Commission Spokesperson telephoned me. He repeated that they are not going to publish the Treaty Charter of the Community at the heart of Europe's democracy. Mr Mamer confirmed again that he would refuse to answer any further questions on the subject.

Mr Mamer was adamant. He said he did not care what the Ombudsman said. Their position would not change whatever the European Ombudsman reported on the abuse. There were many other cases that they had done so.

The letter I had received from the Commission's Secretariat General did not give any reasons for not publishing it. The official merely stated it was considered a declaration and therefore it was not going to be published, (whatever Vice President Suica said). Not logical. Surely the Commission can publish a Declaration if the Vice President said it was necessary.

The Charter is in fact an integral part of the Paris Treaty that defines the institutions of modern Europe. It defines not only the duties and installation of the Commission (High Authority), the Parliament and the Council of Ministers but also the European Court of Justice!  If you eliminate the Charter you should logically eliminate these institutions! 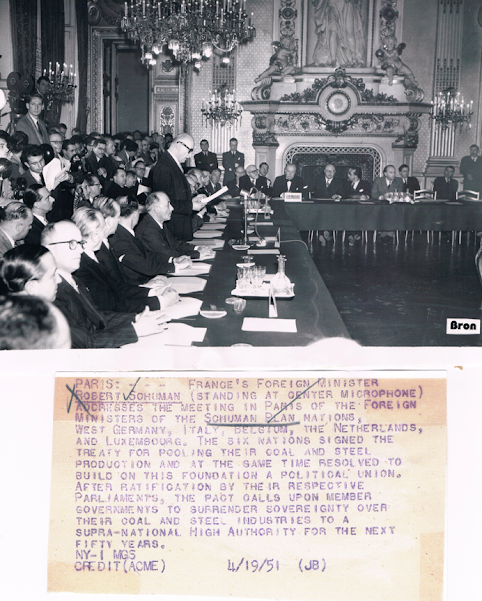 This call confirms that the Commission is governed by rules of technocracy, not open democracy.

Europe is in grave DANGER.

For the Commission, apparently, it is not a question of whether the Charter is a legal and ratified part of the Paris Treaty or is a mere declaration or some other sort of document, the Spokesperson said that it is simply not going to republish it.

I had prepared a letter to European Commission Spokesperson, Eric Mamer, following my question at today's Press conference. I then sent it to him immediately.

Here is my later letter to the EC Spokesperson in full.

In the Commission press room today, Eric, you said the Commission has answered my complaint about the non-publication of Europe’s foundational democratic documents. You did not allow my follow-up question. That did not let me clarify where you are mistaken on the Commission’s stated position for full publication. The letter (that I had not received at the time from the Secretariat General) said nothing to justify the non-publication of the Paris Treaty Charter. It merely gave an (erroneous) description of the Charter. I did not ask about the legal nature of the Charter.  That should be obvious. Schuman said that these documents provided a defence for citizens’ human rights against bureaucracy, technocracy, tyranny and totalitarianism.

The official at the Commission's Secretariat General refused to address the question of publication. The Ombudsman pointed this out to the Commission.  ‘It is not clear what relevance the nature of the document has with the decision not to publish…’ The Ombudsman added ‘The Commission has not replied to the complainant’s request that the documents should be published online and in the OJ.’

The failure to publish has nothing to do with how one official defines the document. The Commission said officially it would publish the foundational documents on European democracy.

So did the Council.

So did the European Parliament.

Reason enough that they should be published.  Is one official allowed to stop publication authorised by Vice President Suica and the Council Presidency? Can an official deny publication of a public document that is a constitutional foundation stone of Europe? Is a technocrat in charge to decide what is good and fit for the public to know above the Commission itself? This Charter is a document signed and sealed in Paris on 18 April1951 by the Six Foreign Ministers with plenipotentiary powers, ratified and legally deposited in the French Foreign Ministry.

The Vice President of the Commission affirmed that, for the Conference on the Future of Europe and the on-going debate on the Democratic Deficit, the Commission would publish this essential part of the Treaty of Paris. The Commission and the other institutions (EP and Council) represented in the press room on 19 April 2021 also confirmed they would publish the full text of the Schuman Declaration including what Schuman called the exordium, the initial summary that situated it in a geopolitical and historical context.

The Commission has not published either document. Fact. Why?

Is the Commission refusing to publish these documents?

I would appreciate your  reply on this question.

Mr Mamer then replied to my letter as follows.

"We have spoken just now on the phone. You received a detailed letter from the Commission, dated 14 December 2021, that states the Commission’s position on the publication of the document you refer to and hence answers your questions.

As I already wrote to you on 21 December 2021, I have nothing to add to what this letter states, either in writing or in the press room. Kind regards, Eric."

The European Commission has, inevitably, to answer to the people and to justice.

Posted by David Heilbron Price at 7:33 AM No comments: