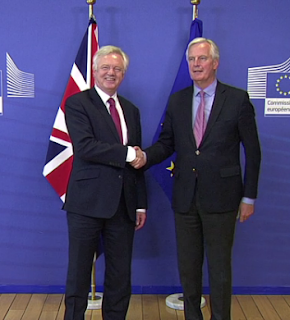 In the Brexit talks, both the European Union and UK have declared they will ensure the maximum level of transparency. It is the alleged policy of the European Commission. They say on their website :


“The Commission, as European Union negotiator, will ensure a maximum level of transparency during the whole negotiating process.”

Why have the UK and the EU negotiator so signally FAILED to keep to the policy?
What is the maximum level of transparency? It is to hold PUBLIC sessions for the discussions of the UK Government’s policy of exiting the European Union. This is a legal obligation of the EU. Why does the EU not follow its own treaties?

Is it possible to open a door? Where then are the television cameras inside the Berlaymont relaying to the public what is being discussed? Where are the press seats inside this room?
Brexit affects just about all citizens in the European Union. Just take the question of contributions to the EU budget. If the UK leaves then the remainder States, EU-27, will have to pay more as the UK is a net contributor.
Everyone has an interest in the process. It is about Democracy. Let us not confuse it with a trade negotiation. It is nothing of the sort. It is a process above all where the UK Government has pledged to leave the economic, legal and democratic institutions of Europe. Like a divorce, the whole process should be held in open court. The EU has no mandate to close the doors. (Any trade arrangement comes AFTER the divorce.)
It is above all a LEGAL process, the democratic Rule of Law. All aspects of the agreement between the EU institutions and the UK have to stand up in Court. Citizens are all members of this club. They are the Jury. Why do politicians need secrecy? They may attack the Rights of Citizens and steal money from their pocket. Any citizen has the right to take any matter to Court if his or her vital interests are unjustly affected. The UK Courts and EU courts must be guardians of the process.
It is therefore vital that the process itself should be completely open. The first session of 19 June 2017 concluded that the UK discussions must follow the priority issues set out by EU-27. They are legal and financial questions.
Everyone has a right therefore to know how much they will have to pay extra. They have a right to know if they have to up-sticks from their home, if they will have to uproot their children from schools, if they have to find new means of employment.
These are not matters that can be decided in secret by someone who does not have the authority to act on citizens’ behalf.
Take the UK Government position. Firstly, there are grave doubts about the validity of Article 50 and its application. (Both France by 9% and the Netherlands by 23% roundly rejected it!) Then, on the resignation of Mr David Cameron as Prime Minister, Mrs Theresa May formed a government in which hardline Brexiteers occupied key posts. Was this justified?
Mrs May’s Cabinet took an extreme position on the outcome of the advisory referendum in which a narrow majority voted leave. The number of votes that did not were the majority (those who did not vote and those who voted Remain were 63%) . 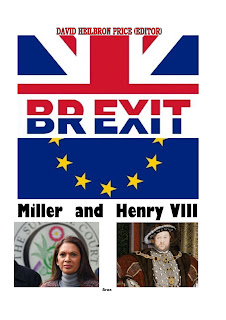 What did the vote mean? The Government said it was a mandate to leave. They said that they did not even have to consult Parliament because it involved a treaty or treaties and for all treaties the government had control under Henry VIII prerogative powers. But no. Courts said otherwise. Furthermore both High Court and Supreme Court confirmed that the Referendum was only advisory , not mandatory to the government.
So the government was proved wrong in its autocratic interpretation. Firstly the people’s voice was advisory. Secondly the government had no right to suspend normal constitutional processes such as passing a Bill and also by implication asking the people again. If an agency misinterprets a wish of its client, it is legally bound to ask the client for clarification before it proceeds.
For example if you took your car to a garage and the mechanic didn’t follow your instructions, and you took him to Court to prove him wrong, don’t you think it would be reasonable for the mechanic would ask for clear written instructions before he set to work again on the vehicle? Wouldn’t you insist that you give him detailed diagnosis of the problems before he put his clumsy fingers into the motor again?
Around Europe citizens object to the secrecy and Democracy Deficit in Brussels. What the May government have exposed is the Democracy Deficit in Whitehall. The garage mechanic needs to show that he is competent before he starts wrecking the car again.
Mrs May’s setback in the Supreme Court implies further constitutional assurances of competence and sensitivity to the population are necessary. All constitutional safeguards must be undertaken properly, as the Three Knights report confirms.

But what has happened in the interim? The May Government called a further show of public support for its Brexiteer position. It failed utterly. Mrs May called a General Election. In the vote of 8 June, it failed to rouse any public confidence. To the amazement of public commentators the Conservatives did not gain any seats in Parliament. The electors turned May’s majority into a minority. Its future is now in doubt as it depends on the support of the Democratic Unionist Party of North Ireland. It also has to ensure that the anti-Leave Conservative MPs do not break rank and vote against it on the whole range of EU matters that it has to pass.
Now take the Commission and the EU. Is it trustworthy? Can it count properly? Does it have another agenda which reimposes a treaty rejected by referendums, obscures Schuman and the origin, purpose and future of Europe‘s great democratic project?
That’s why the doors must be opened.
Posted by David Heilbron Price at 2:45 PM No comments: