Major US Election Fraud captured by the Trillion

US election Cyber-hacking by algorithm

EU reaction at possible fraud on the most massive scale imaginable: Silence.

The EU has its own anti-'disinformation' investigators. It has its own cyber security agency, ENISA.

The EU authorities are zip-mouthed on possibly the most outrageous affront to democracy in the world.

Between 30 percent of Americans used to believe that fraud and cheating took place in the 3 November US election. That was a few months ago. Today the figure is around 50 percent or more. A large number of them are Democrats. They wonder how allegedly Joe Biden gained millions of votes more than Barak Obama, and broke his record turn out. Biden is older, forgetful, lethargic, bumbling and accused of dementia. Hardly the characteristics to gain votes.

They have good reason. The evidence is flowing out. Joe Biden himself said:

"We have put together, I think, the most extensive and inclusive voter fraud organization in the history of American politics," Biden said in the video.

Law-makers with cyber experts from 50 of America's 50 States interacted this summer with other experts analysing software tricks and criminal activities that altered election results and the means to analyse them from the computer based records. Key ballot files have been shown to be deleted. That should automatically and of necessity lead to prosecution. It hasn't.

During the November 2020 US election 37 Terabytes of internet messaging from electronic counting ballot machines were captured as raw data packets 'pCaps'.
A major symposium with the nations top cyber experts is taking place 10 to 12 August in Sioux Falls SD, USA analysing these data.
It has confirmed major fraud.

For one, the electronic counting machines were not supposed to be connected to the internet!
Secondly, the ballot counting machines are owned by a European company whose major shareholders are Chinese.
Thirdly, similar fraud seems to have taken place in a number of other countries.
Is the Commission and ENISA or other European agencies following this? When I asked the Commission, they replied:

We are aware of the press reports both on this story and on the cybersecurity symposium but we would have no specific comments to make.

Algorithm to create false voters
Following some unusual outcomes were candidates lost seats in known Republican strongholds, an investigation was conducted on several levels.
Where did the vast number of Democrats suddenly appear? There was a mystery between the results and the known affiliation of the population. Dr Douglas Frank an eminent physicist decided to lead an investigation into what happened. He had two sources of information. The election results and the electoral roll, the list of the adults in that population who were registered to vote.
Clearly the maximum number of voters could not exceed the number of voters on the electoral role.
Then surprise, surprise. He found that not only had 100 percent of the registered voters voted but in some cases more than 100%! Normally only a proportion, like fifty or seventy percent of the population would actually go to vote.
He showed the graphs to Mike Lindell, who, as a businessman, was familiar with graphs and advertising responses. It showed that someone had been illegally recording that not only all had the registered voters been to the polls that day, but in some cases, others were phantom who seemed to be legally registered. 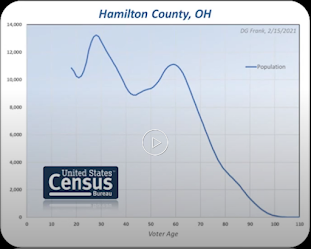 What was going on?
The most reliable method was to check door-to-door to see if the person named as voting was actually living at the registered address.
The result was shocking. About one in thirty was a phantom person.
Votes structured by age
To the sharp mind of Dr Frank that meant that an algorithm was being used. But it wasn't the same as the most recent one. So he tried to fit the supposed voter curve - and found that it fitted better with the previous census report.
Conclusion: Someone was (1) adding extra voters so that the maximum number of voter could be recorded as voting.
(2) These added voters were false.
(3) they were using a computer program to assign the phantom voters so that at first glance they fitted the census data even though it was ridiculous to maintain that 100 percent or more registered people had voted.
(4) the algorithm did not use the latest census as a database and guide for fitting up the falsehood. They had only at their disposal the previous census report.
Above all it showed that massive voter fraud was taking place by adding phantom voter into what was now a computer based voting system.
The Election, at least in Hamilton county, Ohio, was fraudulent.
Then Dr Frank checked all the other 88 counties of Ohio. All showed the same fraudulent pattern or algorithm. This was age-adjusted. The shock was that this 'Registration Key' worked to a perfect fit in all counties.
No human could make these adjustments in real time. It showed that it was done by a computer manipulation.
What was happening? It was like a credit-line for fraud.
In one county of a State, Dr Frank calculated the percentage of voters of a certain age who supposedly voted. Then he checked the numbers in all the other counties. Surprise, surprise! In all the counties the same percentage appeared, regardless of being NSEW, city or farm etc. However when he examined the next State he found the same phenomenon, but with a different percentage.
What was the explanation. Someone with the aid of computers was 'expanding' all votes so that the outcome for each State gave Biden extra votes. Some gave him victory by very small margins, but victory no less.
"The more voters you have registered the more {false} ballots you can put in wherever you need them."
Dr Frank used public data. The same pattern was happening in Florida, Pennsylvania, Colorado etc. The data can be checked by any member of the public -- except in States where the Secretaries of State have barred access to census and registration data. Why would they do that?
What was also incriminating was that as soon as the fact-checkers crossed the State borders, they found that a different Registration Key was being used. And it was being applied to all the counties in the State. Each State is manipulated separately, because in USA it is the electoral college of State victories that determine the presidency, not the total national count.
Independent figures confirm fraud
The material that came into the hands of Mike Lindell fit these figures like a hand and glove. These data are the internet traffic figures. It is possible to capture all the traffic on the internet and record from which computer address it is being sent and to which computer address it is being sent. Each computer has a coded address.
Commercial companies, like Wireshark, can provide such capture of each separate message. And each message is detailed as to time place and contents. The messages are divided into the smallest size for transmission and sent separately. Then at the receiving end the separate 'packets' are reassembled to provide the whole transmission, whether an email or a video.
Packet Capture codes
The packet list pane will show you the exact number of captured data bits. Since the packets are organized in several columns, it’s fairly easy to interpret. The default categories are:

As Wireshark analyzes the network traffic, each captured package is time stamped. The timestamps are then included in the packet list pane and available for later inspection.

Wireshark doesn’t create the timestamps themselves. Instead, the analyzer tool gets them from the Npcap library. However, the source of the timestamp is actually the kernel. That’s why the accuracy of the timestamp can vary from file to file.

You can choose the format in which the timestamps will be displayed in the packet list. In addition, you can set the preferred precision or number of decimal places that are displayed. Apart from the default precision setting, there’s also:

As the name suggests, the source of the packet is the place of origin. If you want to obtain the source code of a Wireshark repository, you can download it by using a Git client. However, the method requires you to have a GitLab account. It’s possible to do it without one, but it’s better to sign up just in case.

The cyber-security people at ENISA should be familiar with the issues as the materials have been aired for several months now. The pCap was known in January. On packet-switching networks, each packet of data has to be verified individually as to contents of its origin and destination and the timing. A packet is typically from tens up to a few thousand bytes.
The capture of election machine data packets can show forensically sure proof of fraud. Each packet holds its own proof. 37 Terabytes have been captured. (One Terabyte = 1,000,000,000,000 bytes.)
There are many multi-billion dollar law suits by Dominion and other firms against news organisations in US, trying to prevent the release for examination of the ballot counting machines. The modems would show the identical data traffic fitting exactly that which is in the 37 Terabytes of pCaps. That would be incontrovertible proof of interference.
Initially both the manufacturers and some politicians maintained that no modems existed on the counting machines but this has been proved false in the case where one of the machines was forensically examined. The 4G modem comes from a firm in Taiwan.
Both major parties in the USA have previously issued statements about the lack of security in these voting machines that threaten election integrity. see video below.
After full analysis of the data stream by cyber security experts, the details of the pCap are being released at the Symposium 10-12 August. They show millions of votes being shifted fractionally and expanded according to both algorithms that attribute false votes to people on the 2010 census and interactive international cyber-hacking following this algorithm. That is why the voting includes tens of thousands of dead people.
Background https://home.frankspeech.com/tv/video/mike-lindell-presents-absolutely-9-0
This is one of several background reports available on https://home.frankspeech.com/content/mike-lindells-absolute-series
Tina Peters images
Mesa county Colorado took forensic images of their computer based Dominion machines before and after a visit of their technicians. Far more than maintenance was involved. The elections clerk was suspicious of what they called the new work-- ironically called Trusted Build.
First two partitions of the HD were made. This provided a means for another operation. Some files were deleted. The partition divisions destroyed the contents of them. By US law no manipulation addition to or deletion from electoral data is permitted for 22 months after an election.
Thus breach of public trust requires legal action up to and including a new election. Then during Tina's trip to the symposium he Secretary of State raided her office in Mesa country, Colorado.
Symposium experts found deletion of files and also software to "de-harden" the security and turn off the encryption for the intruder. This revelation rendered the Dominion software illegal for any future election use.

Posted by David Heilbron Price at 2:44 PM No comments: