In recent days the European Commission has initiated major changes to the European political architecture. The EU has renounced the need for budgetary independence ('balancing the budget') and is becoming willingly subservient to international financial debt markets for the foreseeable future. It is in the process of re-engineering the entire economy on  the basis of a 'Green Deal' that has enormous implications for every man, woman and child in Europe. 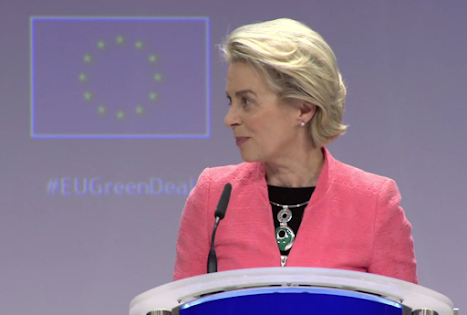 Are citizens and industries in the deal and in agreement with it? Have they ever been able to discuss this in its integrality, in-depth or in detail? Will it hinder and hamstring Europe's economy while China powers ahead with its coal-fired industries? Why are Europeans paying twice the price for energy compared with the USA?
The European Commission says it is open to criticism and improvement of these gigantic plans and changes. But is it? Can the people of Europe have any influence on these and other policies? The European Council sets guidelines and plans behind closed doors. Why? The Lisbon Treaty (TFEU art 15) says the councils should be as open to the public as the Parliament. The European Commission, more and more, acts as the secretariat for an oligarchy, off-limits to observation.
Does the EU listen to the people? Does it listen to small and medium industries? Does it respond to requests to cut spending?
Judge for yourself!
What is the record? The European Commission has refused for seventy years to publish the treaty on how democracy should work in the European system. The principles are outlined in a treaty that its founder, Robert Schuman, called the Charter of the Community (Pour l'Europe, p146). It was signed by the Founding Fathers, plenipotentiary ministers of the six founding States at Paris on 18 April 1951. The name reflects the Magna Carta that formed the basis for democracy not only in Britain but in the United States of America and elsewhere.
If the European Commission was listening to the people it would have long published this treaty both on its website and in the Official Journal.
It has refused.
In April I wrote to President Ursula von der Leyen about this. I received a reply from an official. I enclose my reply to this and the official's letter.
Feel free to publish these letters. I appreciate your support in the cause of press freedom and proper accountability for European institutions that are supposed to be democratic.
Following is the Commission's letter and my letter to President von der Leyen 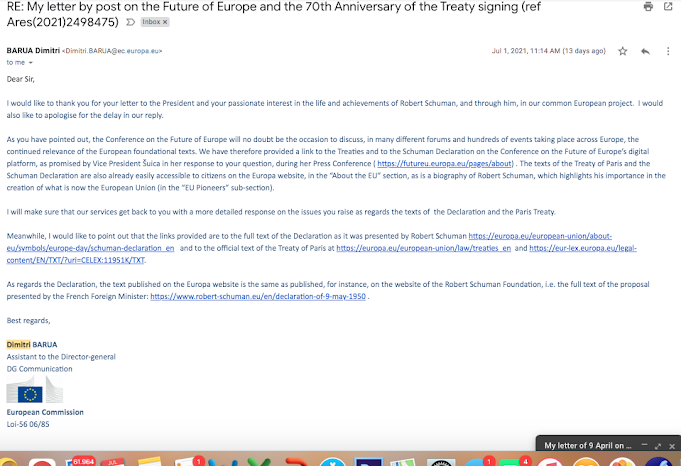 From: David Heilbron Price <davidheilbronprice@gmail.com>
Date: Wed, Jul 14, 2021 at 9:42 PM
Subject: My letter of 9 April on the Schuman Declaration and the Charter of the Community

I am in receipt of the attached letter of 1 July from Dimitri Barua (Assistant to the Director General, Communications) in reply to my letter of 9 April, for which I thank you.  Unfortunately it did not resolve or even deal with the matters I raised: the official publication of the full Schuman Declaration text (not the Proposal) and, above all, the Charter of the Community.

These documents, one a governmental Declaration at the origin of European integration and the other a Treaty, are not of mere academic interest but involve the legal basis and in fact the constitutional foundation of Europe and its future. The non-publication of these legal instruments has already led to lost opportunities for prosperity and losses of European funds amounting to millions and, in the case of Brexit, billions of euros. It is not a matter of personal ‘passionate interest’ but acknowledging the legality of documents agreed to and signed by the Founding Governments.

I was glad to see the text of the Treaty of Paris on the Coal and Steel Community has been linked to the platform of the Conference on the Future of Europe. This Treaty was long published in the Official Journal and formed the basis for actions in the European Court.

However, the ‘Schuman Declaration’ is mislabelled. The French Government of Georges Bidault decided on a Proposal after Cabinet discussions on 3 and 9 May 1950 (Pour l’Europe, p165).  This is called the Schuman Proposal. Then later on 9 May Foreign Minister Schuman made a Declaration to the public – the Schuman Declaration. This includes his one-page introduction, declaring that the proposal marks the birth of Europe and explaining its worldwide mission of peace.

The Schuman Declaration has legal authority and should be published in the Official Journal too. It describes the profound implications of the initiative on a

·      Historical basis (It would bring peace for the first time in several millennia),

·      Geographical: (it was open to all countries including those in the Soviet sphere),

·      Economical: it would bring prosperity as never seen before,

·      Strategic: it announced the creation of Europe as a new entity in world politics,

·      Geopolitical: including its mission to Africa and other trouble spots in need of peace.

As for this unpublished first page introduction, I am quite a little puzzled why the Commission made recourse to the 'Robert Schuman Foundation'. The Robert Schuman Foundation is not a depository organisation competent to find the full text of the Schuman Declaration. It makes the same mistake as the Commission. This text can be found at the Centre Robert Schuman at http://www.centre-robert-schuman.org/robert-schuman/la-declaration-du-9-mai-1950?langue=fr and elsewhere. The full text is reproduced in facsimile in the book of the Jean Monnet Foundation, ‘Un changement d’esperance’.

Two treaties were signed by Governments on 18 April 1951 in Paris, the European Coal and Steel Community Treaty and the Charter of the Community. The originals of these documents relating to the democratic foundation of Europe can only be found at the French Foreign Ministry, as I mentioned earlier, and as the Treaty of Paris declares in its article 100.

Even more importantly, the original of the other signed treaty, the Charter of the Community (Pour l’Europe, p146) is also archived at the French Foreign Ministry. I included html copies of this major, foundational stone of European democracy that I received from the French Minister for European Affairs, Bernard Cazeneuve. It has been on my website, schuman.info , for a number of years.

I should inform you that a complaint (number 202101229) has now been introduced with the European Ombudsman about the reluctance of the Commission to publish these key legal documents that are vital for lawyers, politicians, the press and the general public.

Madame President, the European Commission as Guardian of the Treaties should have officially published these legal documents during the last seventy years. The course of European history would have greatly benefited. For whatever reason they haven’t. But that is no reason why they should not be published now when the need is great.

I look forward to hearing from the Commission about their immediate publication.

Posted by David Heilbron Price at 9:13 AM