Should the EU flag be flown at the Olympics?

So it makes no sense for EU States to flourish the twelve-star flag, because it is primarily a symbol of the Council of Europe. It includes 47 States, not just the 27 of the EU.

The EU seems to be attempting to appropriate total use of the flag. It is an attempted act of pilfering, to use a polite term.

The Council of Europe owns the flag. Decades later, it first offered to it with the European Communities. At first only the European Parliament took up the generous invitation. Other Community institutions then wanted to use it.

But the question of ownership is even more legally dubious. The flag was offered to the European Communities, not the present EU, which is a different animal.

The European Council took over control and made the flag part of EU. But ironically in the referendums on the Constitutional treaty that was rejected by France and the Netherlands, the flag was rejected too. Several other countries were set to reject the treaty but their referendums were withdrawn by the politicians. So the EU constitutionally does not have this flag. The people did not want it to represent the EU.

Then, even more ironically, the Constitutional Treaty was re-assembled from a jigsaw puzzle of articles and amendments and turned into the Lisbon Treaty. Did the Lisbon Treaty have an article defining the European flag and the anthem?

No. The article which was in the Constitutional Treaty was left out of the Lisbon Treaty! Why? Because the British objected that this made the EU appear to be a federal State, which obviously it wasn't.

There is no article in the Lisbon Treaty that says the Flag of the EU is that which is widely flown outside all EU buildings or inside government offices. The best politicians could come up with was a Protocol that was added later to the treaty.

In 1986 at the invitation of the Council of Europe the European Communities were invited to use both the flag and the European anthem, Beethoven's 'Ode to Joy' as arranged for it by Herbert von Karajan. This invitation was accepted by the European Council, which was not a Community institution. It was not even a body with a legal personality. That's like the neighbour of the neighbour saying the lawnmower is his. That seems like the EU's European Council is violating a fundamental right -- the right to own and retain property.

The Council of Europe was designed to safeguard human rights after the abuses of Nazism and Soviet communism. All Member States of the European Communities and the EU have to be members of the Council of Europe. They have to respect its Convention of Human Rights and Fundamental Freedoms.

Robert Schuman said in a speech at the signature ceremony of its Statute in London that adherence to this legal system defines 'Europe' more than geography. 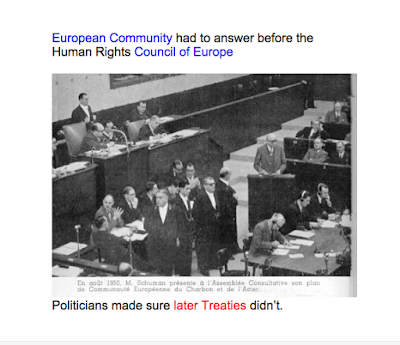 Who flies the flag? The flag belongs by invention, precedent and law to the Council of Europe.

The use of the European flag by the Brussels institutions is an act of recognition of being part of Europe based on Fundamental Freedoms.

These freedoms are recognized by States and their governments. They are not created by governments. Freedoms are given by God, not States. Citizens must be aware that Governments are primarily the entities that wish to curtail human freedoms by abuse of laws and regulations. Citizens need protection against the representatives of the citizens who believe they are better than citizens. The Council of Europe is the body that can do that. Certainly not the Lisbon Treaty's EU that was erected agains the will of the people.

States that stop fundamental freedoms can be suspended or even expelled from the Council of Europe. That was the case of Greece under the dictatorship of the colonels.

Among the Freedoms are:

Origin of the Flag

The European flag was adopted by the Committee of Ministers on 9 December 1955 following a resolution in the Assembly:

Against the blue sky of the Western world, the stars symbolise the peoples of Europe in a form of a circle, a sign of union. Their number is invariably twelve, the figure twelve being the symbol of perfection and entirety.

In fact the question of creating a flag had been raised at the start of Europe's great institution that defines Europe as the zone of free speech and human rights. The Council started its work in August 1949 with 12 signatory States: Belgium, Denmark, France, Ireland, Italy, Luxembourg, the Netherlands, Norway, Sweden (the ten signatories of the Statute on 5 May 1949) and two States that signed before the first session from opposite ends of Europe: Turkey and Iceland. 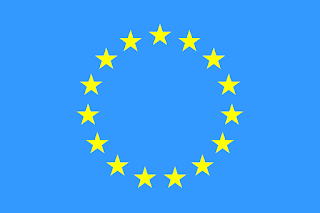 Proposed designs came from across Europe and far beyond. (One, with a single gold star on a blue background, came from a European named C W Raymon in Japan but this design was already in use.)

The Council's Director of Information, Paul Levy, a Belgian, was in charge of the project, and liked the basic design. In September 1953, the Assembly proposed 15 stars (then the number of States). French deputy  Robert Bichet was rapporteur. But the Germans in the Council of Ministers refused. Among the 15 was the Saar, a disputed territory.

The Secretary General Leon Marchal suggested 12 stars.  Levy was charged to provide reasons to support it. He replied:

'Twelve is the sign of perfection and fullness. There were twelve tables of law in Rome; there are twelve apostles; there are twelve sons of Jacob; twelve months of the year; and twelve hours in the day; ... twelve signs of the zodiac represent the entire universe, so why shouldn't twelve stars represent Europe of both sides of the Iron Curtain and both sides of the Pyrenees?'

Leon Marchal drew the case of the twelve stars surrounding the woman of Revelation 12, which biblically represent the twelve tribes of Israel (as distinct to Roman Catholic views). Levy drew up details of the design for public use. Levy must therefore be considered the designer of the flag.

Was the flag a Marian or Catholic symbol? Not according to Levy who was at the origin of the design. Levy was a Holocaust survivor. Marchal was also keen to have a politically neutral emblem.

Meanwhile, officials at the European Coal and Steel Community had created their own flag. It was a not very aesthetic design. It had six stars in two rows of three but on a field divided horizontally between blue (steel) and black (coal). Robert Schuman much preferred the Levy design. Then some decades later, in 1983 the European Parliament decided to take the flag as its emblem. The European Communities as a whole then decided they would also do the same.