For the first time in more than half a century our democratic leaders have promised to publish the documents that reveal how Europeans got their democracy. They show how and why Europeans did not fight another war amongst themselves after WW2. In the course of two millennia Europeans would normally have fought a couple of wars in this last three-quarters of a century.

Now the public should get to know how that carnage was stopped. Thank you politicians! A little late but still welcome.

Emerging victorious from the world war with Hitler’s Nazism and facing a Cold War stand-off with Stalin’s Marxist Socialism, the Founding Fathers of Europe left no doubt about how to build Europe in peace. They wanted a secure democracy, not autocracy. 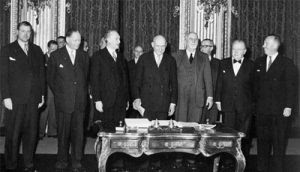 Documents on how Europeans should develop their democracy were signed and sealed 70 years ago. These are perhaps the most important documents of modern times.

Astoundingly the European institutions have NEVER published some of these vital documents.

Now they will be!

The question of the public’s right to know what the Founding Fathers said about Democracy was raised before leaders of the European Commission, Council and Parliament. The date? The day after the 70th anniversary of the signature of the Founding document initiating the European Community on 18 April 1951. That major anniversary, by any account the key date in European history, was almost entirely forgotten and not celebrated by the politicians. 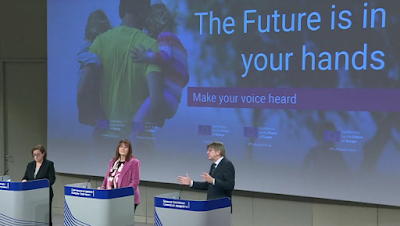 As if by accident, some politicians held a press conference right after the date that allowed them to meet in peace in Brussels.

On 19 April 2021, leaders from three of the five originating institutions spoke about a Conference on the Future of Europe. The question was put baldly about the long, long cover-up.

Success! They all pledged that they would publish these documents… and more. Guy Verhofstadt of the Parliament, Dubrovka Šuica of the European Commission and Ana Paula Zacarias, Portuguese Secretary of State representing the Council were launching a multi-lingual platform so that citizens could debate the Future of Europe. A major conference will open on 9 May. They also said that they would publish – for the first time – the full text of the Schuman Declaration of 9 May 1950. 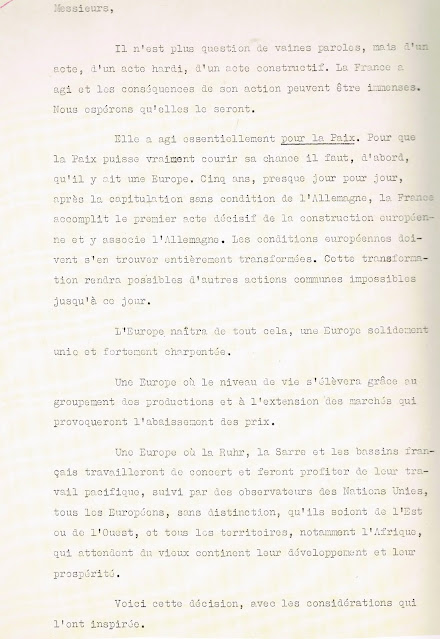 That too has never been published. Instead the European Commission has published a shorter document called the Schuman Proposal and misleadingly called it the Schuman Declaration.

The Proposal is the legal instrument of the French government, agreed in Cabinet, that invited the other countries of Europe to join together to form a European Community of Coal and Steel. It made clear they would go to war no more.

The Declaration is the speech of Robert Schuman, the French Foreign Minister, to the world’s press that includes this proposal but also describes exactly how momentous and unprecedented this move is in European history. It describes the breadth of the action to be undertaken.

Following this Declaration, six countries sent their best experts in law, government and economics to design a treaty to implement the Proposal. That massive work, changing the destiny of Europe forever, was completed in a remarkably short period of less than a year.

On 18 April 1951, six foreign ministers with plenipotentiary power of their governments signed not one but two documents.

The first was the Treaty of Paris that encapsulated the legal provisions of the European Community and described the five institutions that would manage it, democratically, economically and legally.

The second document is of even more lasting importance. Schuman called it the Charter of the Community, reflecting the eternal principles of human freedom of the British Magna Carta. It has been called the Declaration of Inter-Dependence, reflecting the founding American Declaration of Independence that defined separation from British tyrannical (non-democratic) rule from afar.

The European Community Declaration describes the principles by which democratic nations should join together in a Community. It also describes which nations are unfit to join a democratic grouping of fully working democracies. The Founding Fathers had in mind the fraudulent ‘People’s Democracies’ of the Soviet bloc that did not allow freedom of assembly and thought or the freedom of religion. They also wished to exclude, for the moment until changes were made, Spain and Portugal then under dictatorships.

All these historical documents will be soon available for the public, the press, academics and politicians. The representatives of the three institutions, Council, Commission and Parliament, were also asked to provide a full analysis of how the Founding Fathers’ concepts of European democracy compares with the system we have today.

While the original treaty was passed with the full consent of the European people, under the watchful eye of the Council of Europe and its Convention of Human Rights, that has not always been the case of the treaties that followed. As Mr Verhofstadt pointed out, the Constitutional Treaty and the present Lisbon Treaty were both rejected in popular referendums in a number of countries.

With the Founding Fathers’ original documents at hand on how to build European Democracy on a solid footing, the debate on the Future of Europe should be able to have an in-depth debate about how Europeans wish to govern themselves.

The full text of the Schuman Declaration is at https://schuman.info/9May1950.htm

The full text of the Declaration of Interdependence / European Charter is at https://schuman.info/EuropeDeclaration.htm