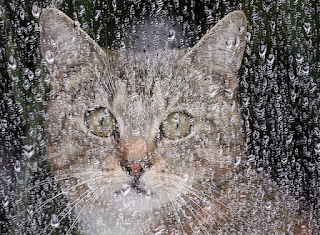 They prefer to stay inside, behind closed doors.

Then they hide the papers.

The most important papers are in fact treaties that have been hidden for seventy years.

What should citizens do about it?

Complain about missing papers? A treaty engaging governments to open government is some extraordinary piece of paper, like no other.

"Access to Documents: what next?" That was the theme of the 15 November conference was organised on  by the European Ombudsman, Mrs Emily O'Reilly. 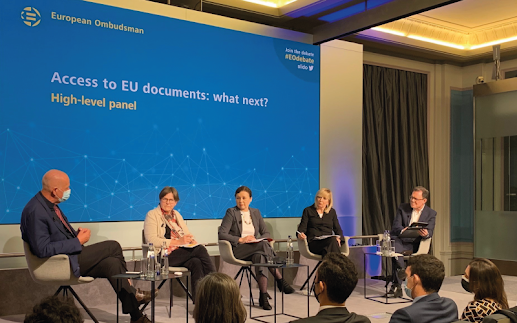 The conference was told:

"The EU institutions are obliged to keep records of documents relevant to their work and any EU citizen can request to view them. This right is enshrined in EU law but Regulation 1049/2001 is now 20 years old. New technologies, as well as changing expectations about the transparency of public administrations, mean it is time to discuss the future of the EU’s access to documents rules.

Transparency and access to documents inquiries account for around one quarter of the Ombudsman’s inquiries each year. There is a fixed timetable in the procedure for requesting documents, but are there too many delays in the system? While institutions have the right to refuse access to documents for certain specific reasons, are these exemptions applied too readily?"

The European institutions have been around for 70 years since the Treaty of Paris was signed on 18 April 1951. That treaty had a very powerful way both to collect information about the first European Single Market. It also knew how to protect the privacy of enterprises, the trade unions and the consumers.

Schuman was no dreamer about bureaucracies. He wrote that a badly run bureaucracy, a technocracy was the greatest danger to democracy. How do you fight an out-of-control technocracy? Transparency. He therefore built in protection of information and information sources and also provided the means to make the most important information available to the citizens.

When the United Nations wanted to organise its global information network, it called on Schuman to write a plan for them.

So why is the Democratic Deficit and maladministration such a problem today?

Let's be clear about the origin of this problem. Let's also understand why the office of Ombudsman was invented four decades after the birth of the European Community.

The European Community was designed as an open democratic system:

Everything was supposed to be open to the public and the press. The principles were clearly written in the original treaties signed and sealed on 18 April 1951.

The key document was the Charter of the Community. It described how all citizens and civil organisations have the right to demand open government so that they can see, investigate and criticise each and every institution. This contrasted them with the so-called People's Democracies of the Soviet bloc. There the politburo met behind closed doors, issued its laws, stopped citizens from criticising the Party and forbade any other ideology but atheistic Communism.

The Charter Treaty is the key document focusing on the right that will stop the EU becoming the European equivalent of the Soviet-style People's Democracy run by a politburo.

What distinguishes an autocracy from a democracy? The citizens' right to choose. With this power they can replace the so-called representatives who preferred to act as self-serving autocrats.

The Commission has promised many times to publish this and the founding documents. It failed to deliver. Their original reluctance to publish it has led to the slippery slope of the Democratic Deficit. That has got worse and worse as one error was compounded by subsequent political compromises, not to say corruption. 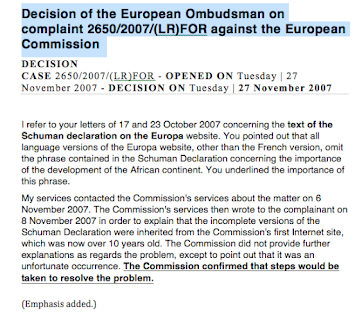 Without the Charter and the applications of its principles, the European Commission became what Mrs Thatcher called in 1990 "an undemocratic politburo." This was just after the liberation of the Central and Eastern Europe from the Soviet Bloc. 'We are trying to get Eastern Europe to accept democratic standards and here we are recreating our own politburo,' she said.

She was not alone, either in the UK or on the Continent.

Generations of European democrats would not abandon the fundamental principles of impartiality and transparency.

They made sure that it was written down -- even in the politicians' own Lisbon Treaty. Its articles say that meetings on the Council should be as open as those in the European Parliament. 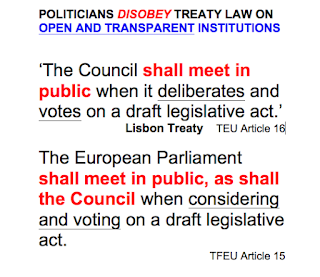 That still has not happened.

The doors of the Council of Ministers are slammed shut to the public and the press.

That means practically all the time except possibly for discussions on security.

How will they be opened again? All the politicians in the Council have to agree that they should obey the treaty they signed up for.

Politicians are as difficult to herd as a clutter of cats.  But it takes only one brave, honest politician to declare and insist that the ministers have to obey the Treaty and act to open the doors.

But even before the Lisbon Treaty, the Democratic Deficit and the closed door autocracy of the Council had stoked public frustrations, not to mention fury. What would the politicians do about it? How could they divert public opinion?

By the year 2000, the European Community system had been blatantly deformed into a politicians' cartel. People openly complained that the Commission was developing characteristics of Soviet politburo secrecy. The newly liberated countries of central and eastern Europe wanted none of that.

So the politicians instead of applying the original treaties, decided to borrow the idea of Ombudsman from the Scandinavian countries. This would give the complainants the illusion of access. It was a veneer to cover the real problem.  It limited citizen's intrusion into their political games.  It diverted their energy into a process of fighting the bureaucracy to release documents rather than giving citizens their proper powers.

Illusion, no substance. False promises of action to publish responsibly. And far from the original basis of open democracy, full public and press access to meetings. 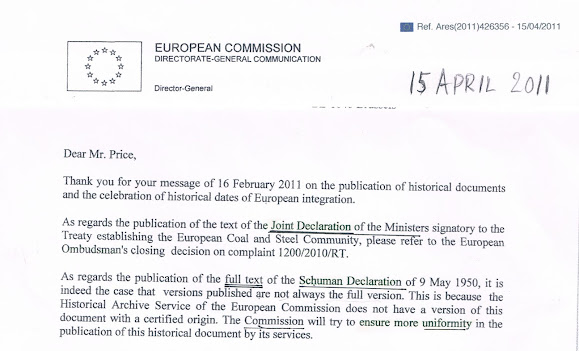 What of demands for the publication of the real documents of people power from 1951? The Commission has over the years come up with a long list of excuses.

They denied knowledge of the Charter of the Community!

Figure that out. The Commission declares that it is 'Guardian of the Treaties'. How then does the Commission not know where the treaties are?

Here is the signature page of the Charter Treaty, the Joint Declaration, signed and sealed as part of the founding Treaty of Paris. 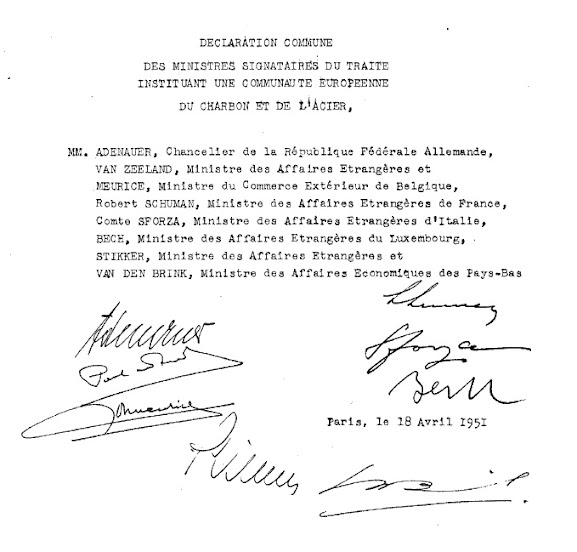 It is signed the same day as the European Coal and Steel Treaty with its other annexes and protocols. It is signed by the same plenipotentiary ministers of Germany, France, Italy, Luxembourg, with two ministers from Belgium and the Netherlands.

Its powers are described in the early legal literature and books on the Community, including those of Robert Schuman, Paul Reuter (who drafted much of the treaties) and others like Walter Hallstein, later president of the European Economic community.

The Commission said they could not find it in their archives! Of course not. The last article of the ECSC treaty says the originals are kept at the French Foreign Ministry in Paris. A decade ago I wrote and obtained a copy. Why couldn't the 'Guardian of the Treaties'?

What sort of incompetence is that?

The time for excuses is over. The governments, all organised civil society and individuals including the Ombudsman should insist that citizens have their rights recognized by the politicians.

The Charter of the Community must be published in the Official Journal!

Posted by David Heilbron Price at 6:56 AM