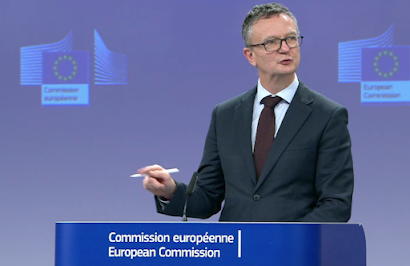 Yesterday in the EU Commission Press Room, I raised a couple of questions about the inactivity and the lack of a direct response of the Commission on the need and legal obligation of the Commission to publish the Charter of the Community. Eric Mamer, the Spokesman, said he had no information. I asked him to help the services provide answers, and publication well before the end of the Conference debate on the Future of Europe.
On 19 April, the Commission affirmed that they would publish this Charter Treaty and the full text of the Schuman Declaration so that citizens can discuss them at the Conference on the Future of Europe. The Commission ('Guardian of the Treaties') has not done so.
https://audiovisual.ec.europa.eu/en/video/I-215453
President Ursula von der Leyen spoke in a Tweet for the Summit for Democracy about how democracy means freedom of choice for Europeans. The Charter or Joint Declaration is a Treaty that provides for citizens a legal instrument to expand the areas of liberty, counter technocratic or politburo-style imposition of regulations and reverse the disastrous Democratic Deficit of the EU that led to many recent problems including Brexit and Rule of Law issues.
The Charter Treaty is held in legal deposit in the archives of the French Ministry of Foreign Affairs as designated by Article 100 of the European Coal and Steel Community Treaty.  The French Presidency of the Council starts next month and it will be embarrassing if the Charter Treaty and the full Schuman Declaration are not published by then.
The Charter of the Community signed by the plenipotentiary Founding Fathers confirms legally that the European institutions in the Treaty of Paris (Council, Commission, Consultative Committee, Court, Parliamentary Assembly) recognise that Europeans have God-given rights of freedom of choice.  This distinguishes a real democracy from the Fascist regimes or the false People's Democracies of the Communist Soviet bloc or any autocratic regime that imposes its own rules or a technocracy.
My recent article on the subject is at:
https://eurdemocracy.blogspot.com/2021/12/eu-document-transparency-real-problem.html
Posted by David Heilbron Price at 1:59 AM