August 1942 “The Jews are being systematically destroyed. There are no more Jews in the Ukraine. Men, women and children have been separated and taken. Men and women have been transported to concentration camps. Often they are sent with hardly any water and without food. They are left to die of starvation and cold. They are often made to dig huge trenches and they are then shot in front of them. They are set on fire with petrol, then covered in lime[1] and earth. The Polish Jews are often destroyed by such radical methods. They are transported, separating father, mothers and children. When the German populations are transported, the families are transferred. The same goes also for those from Alsace-Lorraine. But they had to leave without taking practically anything with them, leaving their country, and finding themselves in very difficult conditions.” 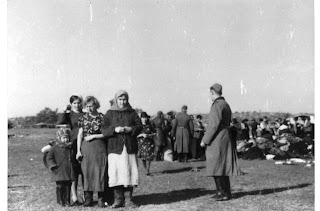 These words are the recorded conversation of Robert Schuman[2] around 14 August 1942.[3] Schuman, later the creator of the European Community, had been the first French deputy arrested by the Nazis in World War II. His horrendous revelations were made as soon as Schuman, after having escaped from Germany, reached the Free French zone.
The words, summarized from a long conversation in note form, were recorded by Dom Basset, the Abbot of St Martin’s at Ligugé, near Poitiers, France. The impact of this and other revelations about the workings of the Nazi State were sufficient to determine his path to join the Resistance. In 1948, Schuman as Prime Minister awarded Dom Basset the Légion d’Honneur for his courageous acts in the war.
Was Schuman’s warning to Basset one of the first averting the Catholic hierarchy of the Jewish extermination? There is every reason to believe that Schuman made this information known to many other people, including ministers in the Vichy government, probably Allied diplomats and to a wide variety of other people in mass meetings attended by thousands of people.
This message in August 1942 by Schuman that Nazis and their collaborators were perpetrating a vast, systematic and industrialized destruction of the Jews — the Holocaust, Sho’ah or Churban — is probably the first warning to Allied governments by a reliable politician of unimpeachable honesty.
Where did Schuman’s information come from?
The source.
On 13 August 1942, after a number of hair-raising incidents, Schuman had crossed the demarcation line separating German-occupied France and that under control of the Pétain government at Vichy. It was a fortunate moment. Some weeks later the whole border area became firmly controlled with a no man’s land. Schuman crossed the frontier at Montmorillon, 50 km east of Poitiers. No source says that he had received the information from the French Resistance.[4] He had little time to communicate with them.
Like the other extraordinary, strategic information that he brought with him, it seems certain that he had gathered this information while a prisoner in Germany. Dom Basset was the first person across the line of demarcation with whom he had enough time and safety to be able to discuss the war at length. A massive manhunt was in progress for him in the Rhineland, Alsace-Lorraine (incorporated into the Reich) and German-occupied France.

The facts that Schuman presented also indicate that the source of the information was German. The Dom Basset notes indicate that Schuman had little news about what was going on in France. There is no indication of transports from France, Belgium, the Netherlands or the Nordic countries. He concentrated on three main areas: the Ukraine, Poland and Alsace-Lorraine –which had been incorporated into Germany — and Germany itself. A major killing programme of Einsatzgruppen was occurring in the Baltic states of Lithuania, Latvia and Estonia as well as Belarus. These states were part of Ostland, ruled by Gauleiter Hinrich Lohse. The German-occupied Ukraine was ruled by Gauleiter Erich Koch, both under Reichminister Alfred Rosenberg.[5]
Official or private?
Was Schuman’s information from private or official sources? The fact that killing in eastern Europe, such as Rumania is not mentioned may be because the Basset notes do not write a list of all countries Schuman mentioned. Alternatively, it may be that Schuman did not know about these areas. Historians have shown that the mass murders in the Ukraine were the most horrific and publicly known.
‘Thousands had a hand in these murders — military personnel, police, native auxiliaries, civilian administrators in the various districts, and representatives of Rosenberg’s Ostministerium. In contrast to the extermination in Poland, ordered by the regiment of the death camps and dedicated to efficient operation, this was a primitive bloodbath — with the widest circle of complicity anywhere in Europe. In 1953, summing up these massacres, Gerald Reitlinger observed that their naked savagery was unsurpassed even in he history of the Final Solution.’[6]

It is likely therefore that Schuman put the picture together from his discussions with native Germans in the Palatinate where, officially, he was under house arrest. When the war broke out Schuman had been brought into the French Government. As a fluent German speaker (with a doctorate in German law) and a network of German friends, Schuman had been made Under-Secretary of State in the Reynaud government charged with coordination and refugees. This involved intelligence matters and dealing with anti-Nazi groups. He was therefore well-informed about who to contact. But there is evidence that Schuman got much of his information direct from the highest Nazi officials later.
Resigning his office at the time of the Armistice, he had traveled back to his constituency in German-occupied Lorraine with some returning refugees. The intention was to report back to the French government about conditions there. A further major concern was to burn his correspondence he had had with Germans and with other figures across Europe who might be compromised.
He was arrested in autumn 1940 because of his energetic defence of the local population against the occupation. This happened at the moment he was about to return. Thrown in solitary confinement for seven months, he was rescued (if that is the term) by a sympathetic German lawyer, Heinrich Welsch[7], on the orders of the Gauleiter Josef Bürckel.[8] The latter, who had been the Kommissar of Austria after the Anschluss, was described as a ‘brutal and efficient autocrat’.[9] The Gestapo wanted to question him about his actions against the Nazi regime in Parliament. He had already undergone Gestapo interrogation, perhaps torture.[10]

The innovation of the High Authority of the European Coal and Steel Community or the European Commission of the later two Communities of the Rome Treaties was made to create an impartial and independent voice for European democracies.
That is why it must be independent, not tied to any interest, whether national, political, commercial or otherwise.
Schuman had spoken out against Nazi injustice and for that he had been thrown into a freezing cell in solitary confinement. Several times he had barely escaped being sent to Dachau and exterminated. He had been hunted like a criminal across Germany and France for three years with a massive reward on his head. Yet his politics before, during and after the war were not based on hate or revenge. He chose to stay in France when his life was at risk every minute to work for the postwar world.
The success, security and prosperity of the European Community is a practical demonstration of his living principle of politics ‘to love your enemy as yourself.’[28] Thus we help ourselves and glorify our Maker.

CHRONOLOGY
1945 Schuman returned as deputy, worked on Constitutional Committee.
1947-8 Schuman became Prime Minister in France’s worst period of political and revolutionary conflict.
1948, 30 Jan -2 Feb second meeting of Nouvelles Équipes Internationales (one of the organisers of The Hague European Congress in May). Participants included: Don Sturzo, Marc Sangnier, plus Prime Ministers Robert Schuman (F), Pierre Dupong (Lux) LJM Beel (NL) minister P-H Teitgen (F) (later rapporteur for the Convention of Human Rights, the foundational document of the Council of Europe) plus Germans including Konrad Adenauer. Resolution of European unity, reaffirming the Lucerne Declaration of March 1944 (federal European order and guarantees for human rights). A January 1949 publication announced its aim, a European Union: Create Europe or die! “Faire l’Europe ou mourir“.
7-11 May 1948 The Hague Congress. Prime Minister Schuman sent two ministers, P-H Teitgen (Defence) F Mitterrand (Veterans) to what was a non-governmental conference. R Bichet, president of NEI, three former French prime ministers, including Paul Reynaud, attended. France and Belgium (Heyman) were the only countries sending minister-level participants. Britain sent a large delegation but no ministers. The German delegation (including Hallstein, Adenauer, Heinemann, Amelunxen, Brentano) was led by Karl Arnold, Ministerpresident, NRW, British zone.
20 July 1948, Hague meeting of ministers, Western Union (Brussels Treaty Organization), Schuman’s Foreign Minister Georges Bidault proposed the creation of a European Assembly (realized in the later Council of Europe) and a customs and economic union (the later Coal and Steel Community and the two Rome Treaty communities). As Foreign Minister in the following governments, Schuman made such supranational institutions a reality.
28 September 1948 Speech as Foreign Minister at United Nations General Assembly in Paris. On Human Rights, he said, celebrating the centenary of the 1848 revolutions. ‘France has the right to say on this subject that she possesses a long tradition if not the copyright of its invention. In this year which is for her as for many European countries a centenary of memories and teachings, she will rejoice that a Declaration could be proclaimed here at home, which in its turn will make its mark in the history of civilized mankind.‘ For Europe, Schuman insisted (not without opposition) on the creation of a system of human rights based on the supranational rule of law, rather than a more declaratory approach of the UN to Human Rights.
25-26 October 1948. France launched discussions on this process through the Brussels Treaty organization (Western Union), creating an official intergovernmental Committee for the Study of European Unity.
10 December 1948, United Nations General Assembly, meeting in Paris, adopted the Universal Declaration of Human Rights.
1949 27-28 January, the Consultative Council of Western Union agreed that a Council of Europe should be created consisting of a Committee of Ministers and a Consultative body meeting in public.
5 May1949, London St James’s Palace, Schuman signed the Statutes of the Council of Europe for France. The aim of the Council of Europe, originally to be called the European Union, was according to their Statutes the ‘safeguarding and realizing the ideals and principles which are their common heritage‘ recognizing the ‘rule of law and that every person placed under its jurisdiction should enjoy human rights and fundamental freedoms.‘ This step, said Schuman, ‘created the foundations of a spiritual and political cooperation, from which the European spirit will be born, the principle of a vast and enduring supranational union.‘ The Teitgen and Maxwell-Fyfe reports provided means for member states to agree on a Convention.
16 May 1949, Strasbourg. In a speech at the Festival Hall, Schuman explained how Europe is now defined by countries which recognize the rule of law in the field of human rights and fundamental freedoms. ‘At the signature to the Statutes of the Council of Europe, I recalled to everyone’s mind that we did not yet have a definition of Europe recognized by everybody. I believed that I was then able to claim that that in thus laying the foundation of an organization, Europe is now beginning to define itself, without the aid of scholars and academics, who I fear, will never be able to agree amongst themselves.’ He defined this as ‘having the European spirit.‘ Thus membership of the Council of Europe and adherence to the principles of Human Rights provides the definition of states who can become candidate members of supranational communities.
9 May 1950 Schuman Declaration of the French Government to create a European Community based on supranational principles and open to all free countries.
4 November 1950. Signature in Rome of the Convention of Human Rights by Schuman and 11 other national leaders. This gave the new Europe a clear legal criterion for defining geographically the new borders of the Continent.
March 1958 Schuman acclaimed Father of Europe by European Parliament.

Posted by David Heilbron Price at 5:37 AM