Will a new Commission, Council and Parliament solve Europe’s present turmoil?
No.
What is the cause of Europe’s crisis of trust in Brussels, in Whitehall and other parliaments?
A scam against the public. A scam may be defined as getting people to follow rules they never agreed to. A scam leaves people feeling angry and bitter in frustration. They attack those around them and usually not the perpetrators of the fraud. The fraudster gets off, scot free.
Consider what happened immediately after the European Parliament elections. In Brussels, the new party leaders including the UK Brexit Party were called to a conference of party group presidents. Were these democrats eager to engage the public in their discussions about the elections? Were they going to show how the so-called ‘Brussels democrats‘ can democratically change the presidents of the European institutions, including the Commission and European Council?
Judge for yourself. They held a closed door meeting! https://audiovisual.ec.europa.eu/en/video/I-173301
After the CLOSED DOOR European Parliament conference of party group presidents, party leaders held a press conference. They called for ‘OPEN, transparent‘ process to chose the European Commission and the European Council president. The leader of the EPP (European People’s Party) said ‘more people voted, they want us to speak for them‘ (in secret!?). The Socialist (S&D) leader said that the European Parliament is ‘place for open transparent discussion‘! The European Left leader said ‘Negotiation must be open, transparent and democratic.’
The acting leader of the Brexit party refused to divulge what went on in the meeting. If Brexit party members believe that UK will leave an undemocratic club, why should they follow undemocratic rules of silence, the rule of cartels and mafias? All politicians whether Scandinavian democrats or Brexiteers seem to get sucked into the Brussels Bog! Schuman said that the Councils, committees and other bodies must be under the control of public opinion not vice versa (Pour l’Europe p145).
https://audiovisual.ec.europa.eu/en/video/I-173431 at 9 minutes
The Brexit Party seemed to have forgotten that the main reason for the Brexit movement was the Democratic Deficit. I wrote that in 2014 two years before the referendum. UK politicians have a shocking ignorance about how European Democracy should work:
And, most outrageous of all, all these new democrats decided in secret by majority on institutional political nepotism. The president of the European Commission — the most important post in Europe — should be one of their buddies, a politician tied hand-and-foot to a political party, and not, as the treaties say, a citizen who is independent of political parties.
That’s poking the public in the eye with a red hot stick. Only two percent of the public have party cards. Politicians thus exclude 98 percent of the public and violate their human and civil rights.
But at least the British know and said so that the Spitzenkandidat system is not in the treaties and has never been ratified by national Parliaments. Maybe that is why Mr Juncker seems never in all his 5 year mandate to have visited UK except for once or twice. In April 2017 he made an evening call to Number 10 Downing Street. Accompanied by his then head of staff Martin Selmayr, Mr Juncker showed Mrs May the 1000 page EU Canada Agreement, CETA, saying that an agreement on a future relationship could be at least as long. He reportedly told Germany's Chancellor Merkel that Prime Minister May was 'living in a different galaxy.'
At the 21 February 2018 Commission meeting, Mr Selmayr was abruptly promoted in a matter of minutes. First he became Deputy Secretary General of the Commission. Then the Secretary General who was present showed his letter of resignation. Thus minutes or perhaps seconds later, Mr Selmayr became Secretary General, the Eurocrat-in-Chief. The 28 Commissioners agreed this extraordinary coup, apparently without criticism. Mr Juncker is leaving but Mr Selmayr remains.
What does Europe’s most powerful bureaucrat, Martin Selmayr, now say about the exclusion of ordinary people from being candidate for the Commission?
Remember what even the anti-democratic Lisbon Treaty says. (That treaty text was rejected in referendums when it was called the Constitutional treaty. It was forced on the European people without their assent or referendum.) It says:

Every citizen shall have the right to participate in the democratic life of the Union. TEU article 10.3

There are a number of citizens who have been declared candidates for the Commission who believe they should respect the treaties. They are independent and have experience (competence). Those are the only conditions. 'Independent beyond doubt' means honest and trustworthy and not an agent of any lobby or ideological association or interest group.
I showed Mr Selmayr a text. He immediately recognized it as part of the EU Treaties. It was the oath that Commissioners must take before the judges of the European Court declaring solemnly that they are completely independent in carrying out their responsibilities in the general interest of Europeans.
The text is the same as that for the judges of the the European Court of Justice with one exception. It is much more STRICT. Judges must be impartial, Commissioners more so.
The oath says they must affirm:

‘Neither to seek nor to take instructions from any Government or from any other institution, body, office or entity and to refrain from any action incompatible with my duties or performance…’

It is obvious to any normal person that a political party is an entity, institution or body so described. A Spitzenkandidat describes precisely a person who seeks instructions and takes instructions from the political party. Being a card-carrying party member active in closed-door meetings of a partisan lobby should immediately disqualify anyone from the Commission or from being a judge.
Mr Selmayr told me that an independent citizen would not be liked by his fellow citizens because he would be considered a technocrat. Really? For more than half a century Europe prospered in its economy and democracy because the Commission was independent. It acted like a Jury or non-partisan Judge. It resisted de Gaulle and other autocrats.
Then, after de Gaulle departed, politicians continued his take-over with technocratic institutions with no democratic controls, hundreds maybe more than a thousand committees closed to the public. That is the story from the massive failure of Maastricht to the Lisbon Treaty. None of these treaties was ever agreed by the British people in referendums. Several other countries rejected them. But the politicians-cum-technocrats took no notice! These are exactly the people Robert Schuman said were the greatest danger for Europeans. They would paralyse European democracy. That is exactly what is happening today.
Mr Selmayr said that such an independent citizen would have to convince the political parties in Parliament that he or she is the right person for the job by lobbying them! The Commission is supposed to be impartial, non-political, so how is the person going to do that? Bribe them by acceding to their often undemocratic ideological programmes? Maybe by promising them they can increase their pay, staff or think tanks at the expense of the tax-payers?
Let us also recall that Mr Selmayr was once a supposedly impartial technocrat and bureaucrat as an official in the Commission. He was one of its spokespeople. He suddenly became the political manager of Mr Jean-Claude Juncker’s Spitzenkandidat campaign in the EPP. How did an official take on such a job when Mr Juncker, a private citizen and ex-prime minister, originally had no wish to become the Commission's president. He had set his eyes on the European Council, the illegitimate child of the illegitimate Lisbon Treaty. Are officials, paid by taxpayers, supposed to be not only politicians but managers of politicians? Were does the money come from for travel and campaigns? 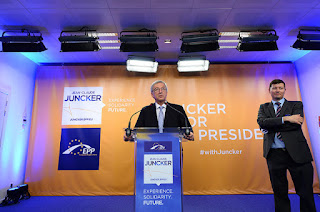 At the 2014 Dublin meeting of the EPP party, Mr Juncker was elected by 382 party apparatchiks out of 812 such activists at the CLOSED DOOR meeting. Mr Michel Barnier came second. 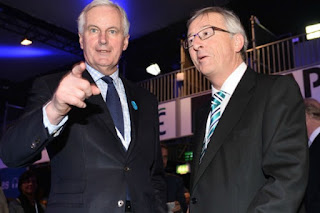 The politicians and their bureaucrats (or bureaucrats and their politicians) have turned the European system into a political cartel. They, as a new Politburo, have decided they will decide for all citizens. The cannot look their citizens straight in the eye or let the public see what is going on.
There is no such thing as a Spitzenkandidat in the treaties. It is a fantasy of politicians. A circus where no citizen actually votes for the Commission. No ballot paper mentions 'President of the Commission'.
The early treaties as agreed by the public define what is European democracy. The treaties say there are only two criteria for being a candidate for the Commission: experience and independence. Independence means that the person is not a lobbyist or tied to any interest group, whether the national government, or any other organisation such as a political party or commercial organisation, association of lobbyists, workers’ union or consumer association. In other words the candidate is unbiased and unprejudiced.
But the politicians willingly exclude all but a few citizens (their own partisans) from holding office. The European Elections are a case in point. It is a scam. The rules do not conform to elementary rules of democracy. They also violate the treaties. The treaties from 1951 define how European elections to the Parliament should take place. But they have never been put into action!
Those who are victims of scams feel betrayed. Scams are an abomination. They are the opposite to justice. But those who perpetrate scams are in a state of moral denial. For them doing the right thing is an abomination. The right thing is the last they want to do or what they have trained themselves to do: control by party cartel.
That is the problem Europe faces with its crisis of Democracy — its Democratic Deficit. The perpetrators who deny real, open and transparent democracy to the people of Europe, will do everything they can to find a way that denies justice and fairness. Anything else would publicise their trickery.
Hence there is a tendency of politicians to drive Europe in the wrong direction. This is self-deception. It may take the guise of political ideology. But the result is the same: people are denied their real voice in decision-making.
Some facts:
Robert Schuman and the founding fathers described Europe’s Community Method for real democracy and wrote the early treaties
Instead, due to autocrats like Charles de Gaulle, elections have been postponed since the European Community's beginning years. He took over France in 1957. None of the elections, specified in the treaties, took place. He made sure that none would.
De Gaulle left in 1969 but the deformed system was not remedied. Europeans have had NO ELECTIONS according to the provisions of the treaties. Instead they took over de Gaulle’s closed door system and made it even worse. Far worse than even de Gaulle’s most autocratic dream!
Europe is now replete with more secret committees and closed door decisions than ever before.
Europe will eventually recover its democracy. What is not sure is When. It will take people with civil courage to affront the anti-democrats.
Will this crisis last as long as that caused by de Gaulle -- more than a decade?