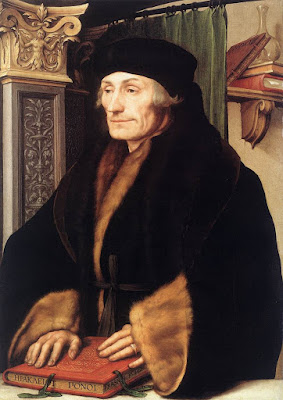 Desiderius Eramus. That name should have reverberated throughout the year of 2016. Five hundred years ago, Erasmus published his most important book. It revolutionized the entirety of west European society.
That exploit has much to tell us. It can explain to us
Today Erasmus is more known as a university exchange programme. More than three million young adults have benefited from Erasmus. His name figures as part of their curriculum vitae. They are students. Some, in their turn, became professors. They are beneficiaries of a university mobility programme where students are able to be taught, not just at one university, but to take up learning across participating colleges and centres of learning in many different countries.
This programme reminds us that universities should be about learning not about indoctrination from a single source. Nor should they be about absorbing the latest faddish theories that, with modern global communications, are pollinated worldwide as if from mushroom spores.
Erasmus was known in his time as a wandering scholar. He was born in Rotterdam, Holland. He worked as a private secretary in Bergen, Brussels and Malines. He studied at the university of Paris. In 1499 he came to Britain, a country he visited four times. He was professor at Cambridge. He obtained his doctorate of theology at Turin. At the time Pope Julius II was brandishing his sword and leading armies against the French, he sought refuge from war in Florence whilst Leonardo da Vinci was there. In Switzerland, fountain of publishing and intellectual freedom, he published many of his works, editions of classics and translations by the great printing house of Froben. In Venice one of the great free printing centres of Europe, Erasmus published some works with the house of Aldus Manutius
To many students today Erasmus represents the freedom to move to another university to learn. In reality Erasmus represents much more. He was one of the handful of men that opened up critical learning and research. That is the basis for Europe’s spectacular rise as a powerful civilization of thought and technology after the “Dark Ages”.
The mobility that students presently enjoy is only a minor part of his legacy. Immobility is a relatively recent phenomenon. British scientists, like Humphry Davy and Michael Faraday, could visit France while the Napoleonic wars raged on the battlefields. The borders of countries were largely closed by two World Wars. Nothing is more isolationist than nationalistic wars where the civilian population is part of the target.
After WW2 the European Community brought in the idea of Erasmus scholarships. The Community had provided the means and the opportunity for a Single Market . The first single markets of 1952 were in coal, iron and steel. Workers could move freely. It was therefore logical that students should gain from this asset.
But what was the greatest achievement of the European Community? What made it all possible? Peace. The European Community brought an end to internal wars in western Europe. How did Robert Schuman come up with the intellectual conclusion about how to do it, integrate the right people and means to bring it about and, above all, have the political courage to devote his whole life to the project?
When around 1903 Robert Schuman had to choose where he would go to study, it was a perplexing choice. He was the son of a patriotic Frenchman who had fought in the siege of Thionville against the Prussian Germans. His mother was a Luxembourger. Robert was born in the Grand Duchy because his father refused to live in German-occupied Lorraine.
After having passed his High School exams with flying colours and determined his destiny, he was faced with the question: Where to go to study? He made an unusual choice. He decided to study at German universities. It required extensive extra studies to pass his entrance examination, the Abitur. The German-speaking states had only been unified by Bismarck in 1871 but the mobility of students to major university towns was still practiced. Schuman studied in Bonn, Munich, Berlin and finally Strasbourg where in 1910 he gained a doctorate cum magna Laude.
Before World War One broke out Schuman was an active agent among intellectuals and statesmen across Europe to prevent a catastrophic world war. He had but a few years for his activities in Germany, Belgium, France and in western Europe. In Berlin at the outbreak of WW1 four eminent scholars (among whom was Albert Einstein) published a “Wake-up Call to Europeans” calling for a supranational Community of scientists, philosophers, industrialists and workers to oppose war.
Schuman’s great achievement was not due to his ability to move from university to university. Nor was it due to the particular brilliance of any one of his teachers, although they were among the most brilliant of this golden age of intellectualism.
His main asset came from Erasmus. We live in an Age of Information. But it neglects Wisdom at its peril.
Peace in Europe owes a great debt still to Erasmus.
(to be continued)
Posted by David Heilbron Price at 5:14 AM